There are indications that a fresh agenda expected to fast-track Nigeria’s digital economy may just have begun as key industry leaders in Nigeria’s telecoms and ICT sector, industry players, the state governments, regulatory bodies as well as other stakeholders’ roundup their jaw-jaw at the Maiden Edition of the National Dialogue on Telecoms and ICT Sector in Nigeria.

The event which hosted by the Association of Telecommunications Companies of Nigeria (ATCON) in the Nigerian capital city, Abuja had in attendance players in the industry including State Governors who took time to expose how to they have leveraged on technology to create a digital economy in their domain.

The governors, some of them who spoke through their representatives applauded ATCON for bringing the industry together to dialogue on key issues that affects the growth of a digital economy.

Shortly before the dialogue began, the Minister of Communications and Digital Economy, Dr. Isa Pantami in his opening remark re-emphasized the resolve of the Nigeria Government, through the Ministry, to continually advance the digital economy agenda of the country.

Pantami who was represented by the Executive Vice Chairman and Chief Executive Officer of the Nigerian Communications Commission (NCC), Prof. Umar Danbatta, said the event with the overarching theme: ‘Harnessing the Digital Resources for the Building of Our National Economy’ and sub-themes lined up for discussions, were apt and timely, given the increased reliance of individuals and businesses on digital platforms to carry out their activities. 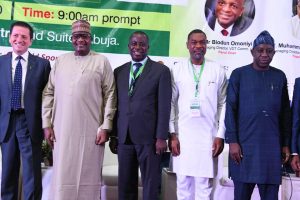 The Minister stated that the digital economy journey started by the Ministry, following the President’s approval in 2019, culminated in the development of an eight-pillar National Digital Economy Policy and Strategy (NDEPS) with a view to providing a more coordinated and enhanced national policy direction for transforming Nigeria’s economy into a truly digital economy.

He said that NDEPS is a policy document that addresses different aspects of development that require attention in order to have a vibrant digital economy, adding that, like Nigeria, most nations are prioritising the need to develop their digital economies because of the multiplier effect on all other sectors of the economy.

The Minister noted some of the challenges of the digital economy to include rapid evolution of technology and widening inequalities between the digital “haves” and “haves-not”; need for new regulations; cybercrime and other threats; low level of digital literacy; and the need for infrastructure.

While expressing optimism about Nigeria’s digital economy strategy, he economic growth and productivity; increased transparency; growth of digital innovation and entrepreneurship; digitisation of work and useful insights from big data as some of the opportunities that abound and from which the economy will gain.

“The telecom and ICT sector stand to gain a lot from the development of our digital economy and the public and private sector need to come on board to maximise the impact on the entire economy,” the Minister said.

However, speaking in his capacity as the EVC of NCC and lead presenter at the second panel session on the theme: “National Funding and Investment Strategy for Broadband Infrastructure and Digital Economy”, Danbatta gave the theme a sharper by focusing on what the Commission had done in the last five years, especially in stimulating the development of resilient ICT infrastructure and the benefits these regulatory efforts have brought to the economy.

Situating his presentation in the context of ‘Nigeria’s Telecom Sector: Yesterday, Today and Tomorrow,’ Danbatta explained that access gaps in the country have been reduced from 217 in 2015 to 114.

“We have licensed Infrastructure Companies (InfraCos); we have introduced innovative policies such as spectrum trading and spectrum farming; broadband penetration has increased from 6 percent to 43.3 per cent in the last five years. Also, from 8 per cent in 2015, the telecoms sector contributed over 14 per cent to the country’s Gross Domestic Product (GDP) as in the second quarter of 2020, valued at N2.3 trillion,” Danbatta said.

The EVC has urged telecom operators in the country to settle the huge interconnect debts being owed by various industry operators, noting that this should be resolved in the wider interest of the industry.

Danbatta said the “interconnectivity indebtedness valued at over N70 billion is a big challenge to infrastructure expansion and inimical to healthy competition” which are needed for facilitating digital economy in Nigeria.

A former President of ATCON, and Secretary to the Akwa Ibom State Government, Dr. Emmanuel Ekuwem who represented the Governor, Mr. Emmanuel Udom said that a digital economy has the capacity to increase the Gross Domestic Product of the nation and pull a lot of Nigerians out the labour market, particularly the youth.

The Lagos State Governor, Mr. Babajide Sanwolu who was represented by the Commissioner for Science and Technology, Mr. Hakeem Fahm applauded the industry for providing the infrastructure to battle the COVID-19 pandemic urging for more support since the battle is not yet won.

He particularly thanked the sector for providing the technology that ensures the business of the private and public sector go on without interruption.

Fahm disclosed that Lagos State plans to lay 6000 kilometers of optic fibre cable across the state in the next two years as part of its committed to making technology the bedrock of her development.

He also said that the State is expanding its technology infrastructure in the State Secretariat and make Lagos a safe city by deploying 2000 Close Circuit Television (CCTV) across the city over the next two years.

According to him, the future of Nigeria belongs to the youths, and that as such there is the need to invest in the education of the youth since there is no future in oil.

President of ATCON, Mr. Olusola Teniola, while running a profile of the dialogue disclosed the national dialogue was targeted at harnessing the digital resources in the country with a view to optimising innovative ideas to effectively pursue the digital economy agenda of the Federal Government.

According to him, the growth across all the sectors of Nigeria’s economy is expected to be exponential as a result of the resolve by the Federal Government of Nigeria under the Ministry of Communications and Digital Economy to drive the entire economy through digital resources and the frantic efforts being pursued by the NCC, National Information Technology Development Agency (NITDA) and members of ATCON.
Isaiah Erhiawarien, Lagos.