Nigeria has been on threshold of low growth economy for some years but if it must move from where it is now, then there must be a digital disruption that will use innovation and creative ideas to transform the economy.
Speaking with technology writers in an interview on the side-line of the Nerdsunite 2018 Conference organised by MainOne, the Chief Executive Officer of MainOne, Funke Opeke said there is an urgent guess for digital disruption in Nigeria due to low growth economy it has been experiencing for years.
She disclosed that the low growth state of the Nigerian economy will not get it to where it ought to be stressing that across the world a lot of growth in the developed economy is been driven by digital economy.
According her, it is time that Nigeria get busy driving its economy through digital technology, just MainOne Nerdsunite conference is doing adding that “we have a collective responsible to do that because tech is all about innovation using technology to create value that will drive the growth of the economy.”
She stated that the role of government in digital disruption for the growth of the economy is create the easy of doing business noting that in other clime where technology has been used to drive the growth of such economy, government was not responsible but the citizens who created the technology.
Opeke added that the global companies like Google, Facebook and Oracle that creating value were products of technology innovation but that the government also need to create the enabling environment so that people can use that creative ability to meet the needs of the society.
The MainOne boss revealed that her company has been supporting start-ups in Nigeria by investing in infrastructure that provide the enabling environment that bringing a lot technology to the technical community so that they easily access the online services that the infrastructure provides. 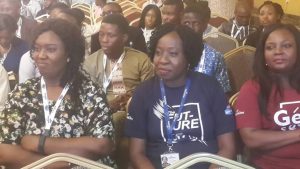 While admitting that a lot of the infrastructure needed to transform the low growth economy of Nigeria is very expensive, she said that MainOne on its own has to find smart ways to provide the technology for the transformational growth of the economy.
One of such ways, according her is shared infrastructure that leapfrog the economy saying that some MainOne partners at the conference with the theme: Radical Disruption are already providing cloud technology and that by using a shared platform tech companies do not need to pay for all the services that technology provides.
She stated that MainOne is committed to making infrastructure more affordable noting that capital still remains a real issue in providing the needed infrastructure for leapfrogging the Nigerian economy from its present low growth state.
Opeke explained the needed technologies are not created in Nigeria and as a result it has to seek for those technologies outside the country, saying “when you look at the dollar requirement to import those technologies, the ability to pay for some those technologies in Nigeria it becomes a little more difficulty. Building infrastructures across multiple jurisdictions across Nigeria is also a challenge and then there is the Right of Way (ROW).”
While calling on the OTTs to host their data in Nigeria, she said that Nigeria is one of the five eyeballs in terms of internet in the African continent some of the OTTs have the data centres where some of the data from Google and its likes resides adding that Nigeria has a lot from content like the ones from nollywood.
She said:” We have a lot of data and world-class data centres, submarine cables and fibre networks in our big cities to take inform around the world, so it is long overdue such data centre services.”
On the adoption of technology in Nigeria, Opeke observed that the West African country is slow in adoption relative to other global countries stressing, “to be honest, when you actually look at the 50 years span for example and you compare Nigeria’s economy to places like South Korea, Malaysia and Brazil in terms of GDP we are not near where they are today.”
She explained that those countries have been much faster in using technology to drive the totality of their economy noting that a “country like South Korea is a number network ready economy in the world and our adoption of technology is slower than that of South Africa, kenya and Ghana.”
The MainOne CEO called on Nigeria to urgently embrace technology and all that it offers “to drive the economy and other aspects our businesses and daily life” saying that MainOne hopes to be an agent to promote that.
Earlier in a keynote address, the Author of Disrupting Africa: The Rise and Rise of Africa Innovation, Nnamdi Oranye revealed that Nigeria is one of the 50 most innovative countries of the world but however noted the low representation of women in technology.
Isaiah Erhiawarien