In January, the publicly-traded software company Elastic faced a serious existential threat — from itself. After blocking Amazon’s cloud computing division, the industry’s largest vendor, from selling its own version of Elastic’s free software, Elastic then accused Amazon of “ethically challenged behavior.”

Elastic provides immensely popular software used by corporations like Walmart and Audi that, among other things, powers search boxes on company websites. The move to block users from buying Elastic-built software from Amazon Web Services — by switching to a restrictive software license — capped a years-long dispute between the two companies that started in 2015, when Amazon’s cloud unit launched its own competing product based on Elasticsearch’s code, and named it Amazon Elasticsearch Services — causing confusion about who created the software, and diverting customers from Elastic. In a tweet, Amazon’s CTO then falsely claimed it had a partnership with Elastic and, soon enough, Amazon was reportedly making more money than Elastic off the tools.

Elastic has made numerous attempts to disrupt Amazon’s adoption of its software — including an ongoing trademark infringement lawsuit filed against Amazon in 2017 — but says it took its recent drastic move to prevent Amazon from selling its software without collaborating with the company. “If you don’t stand up at one point to this level of behavior, then it’s like a bully in the schoolyard,” says Elastic’s CEO Shay Banon. “And this is our form of standing up to it.”

To those outside of Elastic, Amazon is within its right to sell its own version of the software. Elastic’s software is built, after all, off an open-source project, which allows anyone to alter and contribute new code (Elastic makes money by selling complementary services to its users, such as machine-learning features that can detect anomalies in databases). While the project’s creators work at Elastic, open-source technology flourishes when contributors elsewhere — even at competing companies — participate in developing its features and tools. The flipside: anyone can sell a product built off the results, or “fork” it and take it in a new direction its creators didn’t intend.

What was once a no-brainer, however — to list your software through an open license on the cloud leaders’ services, which include marketplaces for businesses to mix and match tools — is now a subject for lengthier discussions in up and coming open source companies. Venture capitalist Jerry Chen, a partner at Greylock invested in multiple open source software companies, including data monitoring startup Chronosphere, says that he’s seeing more startups consider their licensing options now compared to a couple of years ago. “It’s only recently that a bunch of startups have explored new licenses,” says Chen.

Since 2018, at least four other multi-billion dollar companies — Redis Labs, Cockroach Labs, Confluent and publicly-traded MongoDB — have changed their software licenses to block Amazon from reselling their software to AWS’ massive customer base. Representing a combined market capitalization of about $42 billion, with the inclusion of Elastic, these companies appear to be driving momentum in favor of business models built around more restrictive licensing — and sending a signal to emerging open-source startups seeking to compete with Amazon’s cloud division.

“The open core company is still the one ploughing the revenue they make into R&D to strengthen the product, and Amazon is simply exploiting that,” says Spencer Kimball, CEO of Cockroach Labs, which changed its license in 2018 to prevent Amazon from adopting and reselling its database management software soon after MongoDB made a similar change. Some technologists, Kimball adds, describe Amazon’s approach to open-source projects as “strip mining.”

Anecdotally, open source leaders are quick to downplay the significance of a handful of companies shifting to restrictive licenses. It’s not “reflective of what we see in the entire ecosystem,” says Greg Stein, co-founder of the Apache Software Foundation, a non-profit that oversees more than 300 open source projects. However, data to quantify companies adopting restrictive licenses is difficult to obtain, splintered by multiple licenses with varying restrictions, and countless open source projects.

Amazon isn’t the only company generating revenue from its open-source community; Google Cloud Platform and Microsoft Azure have similar business models, and the open-source licenses give the cloud’s leading players the right to sell their own versions. (Microsoft has made efforts to overcome a reputation that it pilfered from the open source community years ago.) But several of the companies balking at Amazon’s practices allege the company is benefitting from the collective efforts of the open-source community, without making meaningful contributions of its own. Then, at its massive scale, Amazon takes much of the proceeds. [Update: After publication, Amazon disputed this assertion, claiming through a spokesperson that “AWS contributes mightily to open source projects.”]

In October, a House Judiciary Antitrust Subcommittee cited Amazon’s use of Elasticsearch as one example of harming innovation in the open source community. “Amazon’s conduct has already led several open-source projects to become more closed, a move driven by a need for protection from Amazon’s misappropriation,” the report stated. (Amazon responded that when AWS offered software like Elasticsearch, its work served to “add to, not supplant, the set of capabilities provided by the upstream open-source projects.”) 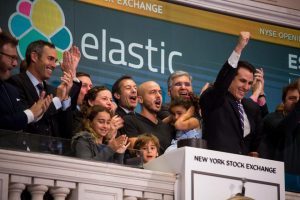 One response to Amazon’s influence: if you can’t beat them, join them. In December, open-source analytics and data visualization company Grafana Labs partnered with AWS to sell its services through AWS, an agreement that included a revenue sharing contingent. “I think it’s better for Amazon to have partnerships, whether it’s Elastic, Grafana Labs, or whatever, and I think Amazon has started to realize that,” says Raj Dutt, Grafana’s CEO. “It’s my hope that what we did with Amazon is a new way forward for open source vendors to work with cloud vendors.”

For Elastic, open defiance has come at an immediate cost. After already offering its own version of Elastic’s software built around the Elasticsearch project, AWS announced in January it would launch and support its own “forked” version of the open-source project, creating a rival community to the one centered around the project’s creators at Elastic. “Elastic knows what they’re doing is fishy,” four AWS engineers wrote in a blog post that several industry experts told Forbes was an unusually belligerent message for the company. “It’s also why they felt the need to write an additional blustery blog…to try to explain their actions as ‘AWS made us do it.’ Most folks aren’t fooled. We didn’t make them do anything.”

Perhaps surprisingly to Elastic — but less to those mindful of Amazon’s outsized influence in the cloud ecosystem — some open-source leaders have sided with Amazon in the dispute. To them, Elastic reneged on its commitment to remain open-sourced; they also pointed to Elastic’s booming share price, which has more than doubled in the past year, as evidence the company wasn’t feeling financial pressure from Amazon’s approach. (Elastic generated $159 million revenue in the fiscal quarter ending January 31, up 39% year-over-year.) “What pisses people off, like in the Elastic case, is where they’ve built their community off a liberally licensed piece of software…and then they switch and change the licensing,” says Chris Aniszczyk, CTO of the Cloud Native Computing Foundation. “That’s basically like telling your community to go screw itself.”

Ali Ghodsi, CEO of the $28 billion-valuation open source data platform Databricks — in which Amazon has invested, alongside divisions of Google, Microsoft and Salesforce — has little sympathy for Elastic and the other companies that moved to restrictive licenses. “If the open source vendors were really good at hosting and managing their software in the cloud, it wouldn’t be a problem,” he says. “They’re not, that’s the problem.”

All that leaves Banon, Elastic’s CEO, disappointed. Now a billionaire due to his stock’s performance in recent months — Forbes can report for the first time, with a net worth of $1.3 billion — Banon says he only cares about meeting the needs of his customers. “We’ve been straight and honest with everything single thing that we’ve said,” he says. “But you get to a point where a company just abuses your trademark, your brand, your product so much, that you have to go and draw a line.”

If Banon and his company’s fortunes on the markets turn due to his public stand, his corporate martyrdom may have at least planted a seed for other startups. Earlier this week, a year-old Berlin-based open-source company called Lightmeter, which provides software to improve email delivery, announced that it was trademarking its software to prevent future forks of its code. Without naming names, Lightmeter explained the move as due to the “long history of the abuse and misuse of Open Source software.” The announcement linked back to Elastic’s blog post declaring war on AWS.